Best Water Parks in the US 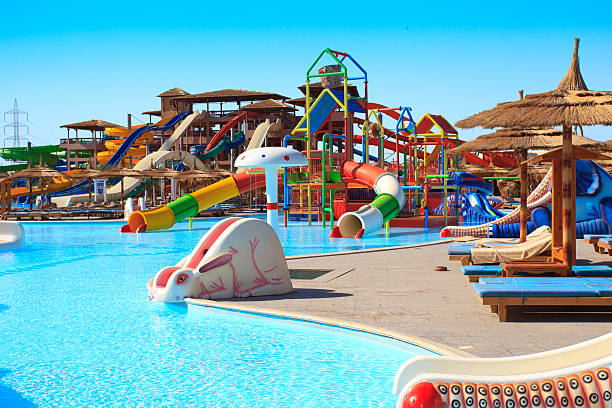 The United States is no stranger to water parks. There are so many great water parks throughout the country that it’s hard to keep track! Though there are numerous water parks that can be found operating within each state, there are a few that have a more profound reputation than others. Join us as we take a look at the best water parks in the US.

We’ll start this article off by cutting right to the chase with the biggest water park in the entirety of America. Noah’s Ark takes it’s name from the biblical tale, and visiting the gigantic park may be enough to convince guests that the entire world has flooded over! The water park is located in Wisconsin Dells, Wisconsin, and spans 70 acres. There are around 40 different rides in total at the water park, and these rides offer everything from family-friendly fun to extreme thrills.

Those looking for thrills at Noah’s Ark need look no further than the park’s water coaster, which goes by the name of the Black Anaconda. This water coaster reaches speeds of up to 35 mph, making it one of the fastest of it’s kind in the world. Meanwhile, the nearby wave pool offers fun for the whole family, and there’s also a lazy river with adventure scenery.

Finally, Noah’s Ark boasts a significant section dedicated just to smaller children. This section features it’s own slides, as well as a variety of splash pads and other fun things that kids will enjoy. Given it’s Wisconsin location, the park is only open for the summer. The park opens in May and closes in September, but it draws crowds from all across the world when it’s open.

Located in the waterfront town of Panama City Beach, Florida, Shipwreck Island Waterpark is a water park with a unique 17th-century theming. The main draw of the water park goes by the name of the Great Shipwreck, and it consists of a replica of an old ship.

Guests can zip line down from it, but that’s just one fun thing to do at the park. There are also plenty of other rides and attractions, including the thrilling Tree Top Drop and the Zoom Flume. Both of these rides provide significant thrills, with the Tree Top Drop dropping guests into the water from 60 feet up in the air and the Zoom Flume plummeting them down a hill in a flume.

Besides the two aforementioned attractions that provide thrills for older visitors, there are also several attractions at Shipwreck Island Waterpark that everyone can enjoy. These include the Skull Island family activity pool, as well as the Raging Rapids. The Raging Rapids represents a mix between a traditional lazy river and a wave pool, providing guests the opportunity to fight modest waves in their tube.

This is the section of the park that’s located closest to it’s entrance and it features the traditional variety of slides and pools. The second section of the park, dubbed Pine Valley, features a wave pool and lazy river. Further into the park, more interesting and unique attractions can be found.

Slippery Ridge is the third area of the park, and it’s where things truly start getting crazy. This section is filled with more intense slides than the ones that can be found in the park’s first section. However, the park’s tallest water slide doesn’t show up until the fourth and final section, which is called Flash Flood Canyon. The slide goes by the name of the Dive Bomber, and it’s certainly not for everyone!

This alone makes the park worth visiting! Other notable Six Flags Hurricane Harbor locations include the ones found in Arlington, Los Angeles, and Chicago.

There is no shortage of water parks in California, but Knott’s Soak City Water Park represents one of the more interesting offerings. As one might assume from the name, Knott’s Soak City Water Park is Knott’s Berry Farm’s attempt at a water park, and it’s pretty impressive! The park is located right next to it’s parent amusement park, and it’s got plenty of attractions of it’s own to draw in the crowds. The park spans less than 20 acres, but it features over 20 different slides.

In addition to it’s numerous slides, Knott’s Soak City Water Park also features a unique play area by the name of the Beach House. The Beach House is three stories tall and is equipped with numerous spray nozzles and water guns for kids to duke it out with. Meanwhile, adults can waste the day away relaxing in the lazy river. Finally, there’s a gigantic wave pool holding 750,000 gallons of water!

So we’ve seen how Six Flags and Knott’s Berry Farm do water parks, but how about Dollywood? In 2001, Dolly Parton decided to expand her successful amusement park Dollywood to include a water park right next to it. Dolly held a contest amongst her fans to decide a name for the park, the name that ended up winning out was Dollywood’s Splash Country. Dolly has claimed that the park takes inspiration from her childhood playing in the rivers of the Great Smoky Mountains.

Schlitterbahn is a water park that’s located in New Braunfels, Texas, and it’s one of the best in the South! There are over 50 different rides at Schlitterbahn, and these include a few unique offerings that provide some serious thrills. The park has a water coaster that goes by the name of Master Blaster, and the coaster lives up to it’s name with it’s high speeds.

Other attractions include the surf-simulator ride Boogie Bahn, as well as the more traditional lazy river. One cool thing about Schlitterbahn is that it features an indoor section that’s open all year round, which makes it fairly unique amongst other water parks in the area.

Speaking of indoor water parks, the Kalahari Resort in Sandusky, Ohio, has one of the most impressive in the country! The park features such popular slides as the Tanzanian Twister and the Swahili Swirl, as well as family-friendly offerings like a play area and a lazy river.

Splashin’ Safari is a water park that’s located in Santa Claus, Indiana, and it’s home to the biggest enclosed water slide in the world! This water slide goes by the name of ZOOMbabwe, and it’s one of many things that make Splashin’ Safari a great place to visit. Another notable attraction at Splashin’ Safari is Zinga, which is a slide that’s eight stories tall. Meanwhile, the Jungle Racer allows ten different visitors to slide at once in parallel lanes.

In addition to featuring the largest enclosed water slide in the world, Splashin’ Safari also features two incredibly long water slides by the names of Mammoth and Wildebeest. Combine all of these unique and thrilling attractions in with more traditional fare like a lazy river, and you have one of the absolute best water parks in the United States.

Finally, let’s take a look at Whale’s Tale Water Park, which is located in Lincoln, New Hampshire. The water park has been in operation for over 20 years and spans just under 20 acres of land, and it’s made a name for itself as one of the best water parks there is despite it’s relatively meager offering of attractions. Though Whale’s Tale Water Park only has around a dozen attractions in total, it makes them count! One of these attractions is a waterslide by the name of Downpour that spans 430 meters and reaches speeds of up to 40 mph! There’s also the Banzai Pipeline, which is a halfpipe slide.

Regardless of what you’re looking for in a water park, we hope you’ve found a great one in this article! From Noah’s Ark in Wisconsin to Whale’s Tale Water Park in New Hampshire, there are plenty of great water parks for visitors to experience in the United States.