Best Places to Visit in Vermont 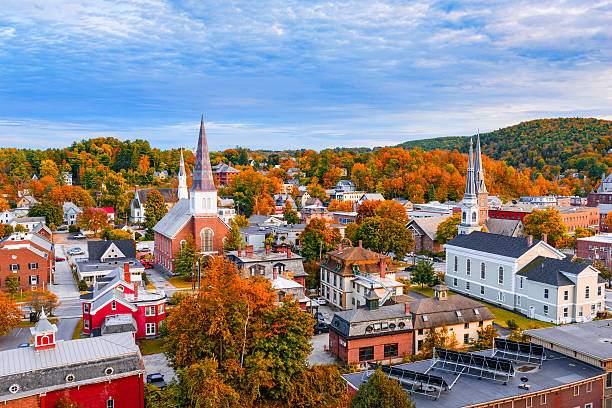 Located in the northeastern United States, Vermont is a picturesque state with plenty of great locations to visit. Creating an itinerary while visiting the state of Vermont can be difficult, as there are many great hidden treasures lining every corner of the state. Thankfully, we’ve sorted through the state’s peak attractions to help you out. Join us as we explore the best places to visit in Vermont.

We’ll start this article off by looking at one of the more obvious places that you’ll need to visit while wandering around within the state of Vermont. Burlington is Vermont’s biggest city, and one of it’s most popular attractions would be Church Street Marketplace. This marketplace is home to a variety of shops and eateries, including Ben & Jerry’s! For those that don’t know, the boutique ice cream label was founded in Vermont, and it’s factory still resides in the state’s historic village of Waterbury. The location that can be found along Church Street Marketplace is just a shop, but it’s arguably the most notable Ben & Jerry’s shop in the country.

Even if crowded shopping areas aren’t your thing, the city of Burlington is still worth a visit due to it’s proximity to the lovely body of water known as Lake Champlain. You’ll find plenty of locals and tourists alike going out in the waters when the temperatures right to partake in watersports, with all kinds of different watersports being practiced in the area.

The city of Burlington is also notable for it’s variety of festivals that can be found occurring at all different times of the year, with the majority of these festivals being held at Church Street Marketplace. Lastly, the city has a farmers’ market that occurs all year round, which is held on Pine St.

On the subject of Lake Champlain, visitors to Vermont will certainly want to check out the Champlain Islands. This group of islands only spans about thirty miles, but there’s plenty to enjoy while visiting it. You’ll have to take a ferry to get out to the Champlain Islands, but the trip will be worth it for the scenery once you’re there. The area is known for it’s natural beauty, and was the location of Vermont’s very first vineyard. Popular things to do on the islands include taking scenic rides, whether by car or by bike. There are also some camping opportunities to be had on the archipelago.

During the winter months, the Champlain Islands attract an entirely different crowd due to the fact that they comprise one of the best locations in the entire state of Vermont to go ice fishing. Ice fishermen haven’t lived until they’ve dipped their line into the freezing cold waters of the Champlain Islands! One of the reasons that the archipelago is able to retain it’s natural beauty is because it’s so sparsely populated. The largest town that can be found amongst the group of islands is only home to around 2,000 people, meaning there are typically nearly as many visitors as there are residents.

Like the Champlain Islands, Stowe is a location that has some decidedly different things to offer depending on the time of the year that you come to visit. During the winter months, Stowe is all about snow sports, with a particular emphasis on the sport of skiing. However, during the summer months, the little Vermont town comes alive with the sounds of various festivals and art shows. Stowe is also notable for it’s natural beauty, as there are plenty of hiking opportunities to be had around the town. Sound of Music fans may recognize Stowe as the location where the von Trapp family ran a ski lodge after fleeing from Austria.

For those that don’t already know their state capitols, Montpelier is Vermont’s capital city. If they aren’t already familiar with the fact, it may surprise visitors to learn that Montpelier should be given this distinction instead of the aforementioned city of Burlington. Burlington is certainly the more bustling city between the two. In fact, Montpelier is noted as being the least-populated state capital in the entirety of the United States. This decidedly dishonorable honor might make some think that Montpelier doesn’t have all that much to offer to tourists. However, beyond it’s cultural appeal, Montpelier has a few attractions that make it worth visiting.

There are numerous popular maple-syrup farms in the city of Montpelier, with Morse Farm Maple Sugarworks and Bragg Farm Sugar House & Gift being the two most popular. There’s also Dick’s Maple Farm LLC and Templeton Farm for those who like to support smaller manufacturers. Finally, no visit to Montpelier is complete without visiting it’s statue of Ethan Allen. Ethan Allen was a revolutionary war hero and the founder of the state of Vermont.

Just several miles south of the city of Burlington is the town of Shelburne. Though it’s only about seven miles away from Burlington, this quaint little farming town is liable to make visitors feel as if they’ve ventured much farther. Shelburne is comparatively sparse, but that’s what gives the town it’s charm! The town is most notable for it’s variety of farms and vineyards, many of which offer tours for visitors.

If you’re visiting Vermont with small children, then you may be interested in knowing that the town of Shelburne is home to the Vermont Teddy Bear Co. This toy manufacturer has been in operation for several decades, and has since made a name for itself with both it’s adorable toys and it’s kid-friendly tours. Finally, as with Burlington, the town of Shelburne is also very close to Lake Champlain, meaning that visitors to the town will have easy access to the water.

The mountain has come to be known by some as the “beast of the East”. Killington Resort also has the largest ski area that can be found at any location along the East Coast.

Those who are intimidated by the prospect of tackling the beast of the East may be glad to hear that there are also several other mountains comprising Killington Resort’s overall ski area, with there being around 150 different ski trails in total. These trails run the gamut in terms of difficulty, so visitors should have no problem finding one that’s appropriate for their skill level, even if they’re just starting.

Though Stowe is the festival town within Vermont, there is another town in Vermont that shares it’s name with one of the most notable music festivals in history! Of course, that would be the town of Woodstock. The Vermont town is a good deal less known than the iconic music festival, but this is what makes it one of the state’s hidden treasures. The little town is known for it’s charming aesthetic, with the area being considered one of the most picturesque in the country. Numerous historic buildings and farms line the roads. Some of the most popular activities to do in the town of Woodstock include hiking, as well as visiting the various little shops.

Those who are more interested in the natural wonder of Vermont than the state’s quaint charm should turn their gaze over to the Quechee Gorge. This gorge is 165 feet deep, which makes it the deepest gorge in Vermont. Scientists speculate that it was formed over 10,000 years ago by shifting glaciers. Nowadays, the gorge attracts visitors from all over simply for the sight of it. At the bottom of the gorge is the Ottauquechee River, which features excellent rafting with it’s whitewater rapids. There’s also the historic Quechee Gorge Bridge, which is the oldest steel arch bridge in the state. The bridge was built in 1911, and is still in use today.

There’s plenty to do and see in the picturesque state of Vermont, and hopefully this article has given you an idea about where you should visit when you’re there! Whether you’re interested in the hustle and bustle of cultural hubs like Burlington and Stowe or are more interested in the quaint wonders of locations like Shelburne, Woodstock, there are plenty of great places to visit within the state of Vermont.