Best Things To Do in Santa Monica, California 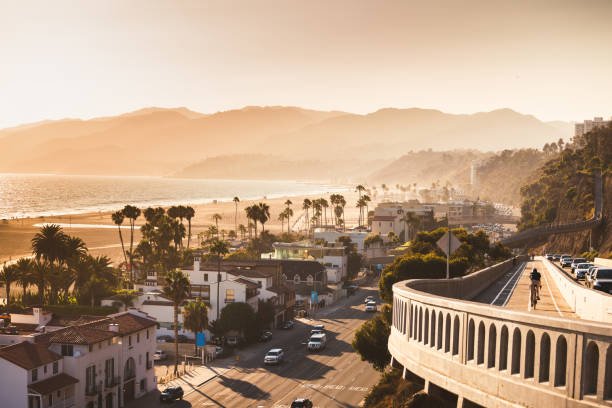 Santa Monica is a coastal city in California with lots to do and see! Located just west of Los Angeles, Santa Monica is a favorite place to visit amongst tourists in the region. Whether you prefer the city’s beautiful beach, its expansive mountains, or its unique culture, there’s no shortage of awesome things to do while you’re visiting. Join us as we explore the best things to do in Santa Monica, California.

Given Santa Monica’s location on California’s coast, it should come as little surprise to readers to find out that one of the preeminent places to visit in the city is a beach. There are numerous beaches scattered along the coast of Santa Monica, but the most popular of these beaches is undeniably the city’s namesake beach: Santa Monica State Beach.

If you’re looking to avoid crowds, Santa Monica State Beach might not be the best place to relax. Thankfully, there’s a more secluded beach just north of this one that should provide quiet-seeking tourists with the serenity they desire. This beach is called Will Rogers State Beach. Join us as we explore the best things to do in Santa Monica, California.

Spend Some Time on the Santa Monica Pier

The Santa Monica Pier is to Santa Monica what the Statue of Liberty is to New York City! If you’re looking to get the full Santa Monica experience, you’re going to need to visit this iconic destination. Of course, to do so, you’re going to have to face some crowds! For many, however, the amount of people in the vicinity is just going to add to the fun.

If you’re looking for a place that’s always bustling and filled with awesome things to do for visitors of all ages, the Santa Monica Pier is it! You’ll be able to see the pier from a distance thanks to the giant Ferris wheel that’s perched on it, which is part of the pier’s famous Pacific Park.

Pacific Park is arguably the biggest draw bringing tourists to the Santa Monica Pier. The amusement park offers everything that a tourist could ask for when it comes to old-school beachside fun. In addition to the iconic Ferris wheel, Pacific Park also features a steel rollercoaster that is renowned for it’s thrills. You could spend the whole day at Pacific Park, but it’s not the only thing that the Santa Monica Pier has to offer! The pier is also populated with street performers putting on interactive shows for visitors, as well as numerous vendors offering the typical junk foods.

Santa Monica Beach State Park and the Santa Monica Pier are a mere walking distance from the heart of Santa Monica, so tourists should have no problem getting to these fine destinations from their hotels. The beach and the pier are undeniably the most popular places to visit in the city of Santa Monica, but there’s also plenty else to do!

Take a Stroll Along the Third Street Promenade

Heading into the heart of Santa Monica’s downtown area, you’ll find the Third Street Promenade. Visitors will find plenty to do and see while strolling along this active and finely decorated street, whether they’re looking to grab a bite to eat or simply to take in the scenery. The promenade is filled with sculpture and fountains galore, as well as numerous quality restaurants, all offering something unique.

Explore the Trails in the Santa Monica Mountains

Though the beach is arguably the most popular natural sight in Santa Monica, the city is also home to some pretty spectacular mountains. Once you’ve had enough of the city’s coast, you can head inland to check out the Santa Monica Mountains. Entering into this stunning mountain range will make visitors feel like they’re light-years away from the hustle and bustle that can be found within the heart of the city. However, these mountains are still pretty crowded compared to some of the more secluded mountain ranges that can be found farther away from populated areas.

Unless you’re a Santa Monica local, you’ve likely never heard of Tongva Park. From the outside looking in, the park is just another community recreation area like you’d find in any other America city. However, there are some things that make Tongva Park stand out. For one thing, the park is incredibly well-decorated, and you can have fun just strolling around and looking at all the little artistic flourishes. For another thing, the park is home to an incredible playground. Not only is the playground itself large and impressive, but there’s also a splash-pad area for kids to cool off. The park is located not all that far from the Santa Monica State Beach.

Of course, there will always come a time when a tourist needs to do a little shopping! Thankfully, Santa Monica has visitors covered when it comes to shopping, as the city is home to an impressive shopping area that can be found along Montana Avenue. Whatever you’re looking for, you’ll likely be able to find it at one of Montana Avenue’s numerous shops. From local craft goods to designer clothing, the stores have it all. Beyond the shopping opportunities, there are also some great cafes located along Montana Avenue for shoppers to take a breather and get some coffee.

Finally, the Montana Avenue shopping center features some impressive eye candy for the tourists. There are always new art installations being put up along the avenue, leading to new and unique sights for visitors to appreciate year-round.

The Santa Monica Farmers Market is especially popular with locals looking to stock up on fresh produce. If you’re a resident of Santa Monica, there are few more sustainable and enjoyable ways to get your groceries than by visiting this twice-weekly farmers’ market. The market is located along Arizona Avenue, and it’s only open Wednesdays and Saturdays. As one might expect, Wednesdays are the day to go if you’re anxious to beat the weekend crowds.

The Santa Monica Farmers Market offers much more than just produce. Visitors will be able to get their hands on an insane variety of local treats, and there are some vendors offering hot dishes. Beyond the opportunities for food, the farmers’ market is also a great place to soak in the Santa Monica culture. The Santa Monica Farmers Market can get pretty busy, as the place tends to be popular with both locals and tourists alike. However, facing the crowds- and the tough parking- will certainly be worth it for the experience.

Let Your Wonder Soar at the Museum of Flying

While all of the aforementioned places are great locations to put your finger on the pulse of the here-and-now in Santa Monica, there are also some great locations in the city where visitors can step back into the past. One of these locations is the Museum of Flying, which is a museum dedicated to the history of different modes of flight. This means that the museum has exhibits dedicated not only to tried-and-true aviation, but also to such things as space travel!

Enjoy the Wide, Open Sprawl of the Palisades Park

We’ve already talked about the Santa Monica Pier, but did you know that there’s another, much-less-talked-about pier adjacent to it? The Newcomb Pier doesn’t have quite as much to offer as it’s more popular cousin, but it still offers a few attractions that Santa Monica tourists might not want to miss out on. The main attraction featured on the Newcomb Pier would be the Santa Monica Looff Hippodrome, which is home to a carousel that has been standing for 100 years.

Learn About the Region’s History at the California Heritage Museum

While the Museum of Flying is arguably the most unique museum that can be found within the city of Santa Monica, those who are more interested in the area’s general history may prefer checking out the California Heritage Museum. The museum is located on Ocean Avenue, and it hosts a wide variety of exhibits featuring artifacts from California’s history. To top it all off, the museum is located within an authentic 19-century home that has been finely preserved!

Take in a Performance at the Broad Stage

Visitors to Santa Monica will not be all that far away from Hollywood, where dreams are made and broadcast across the globe! However, those looking for a more intimate taste of the performance arts may want to head to the Broad Stage. The Broad Stage is Santa Monica’s preeminent performing-art center, and there are different types of shows held at the location all throughout the year.

Whether you’re interested in experiencing the vast amount of natural beauty offered via Santa Monica’s beaches and mountains or are more interested in the city’s culture, there’s plenty of stuff for visitors to do and see! From heading out to the Santa Monica State Beach to taking in a performance at the Broad Stage, there are plenty of awesome things to do in Santa Monica, California.