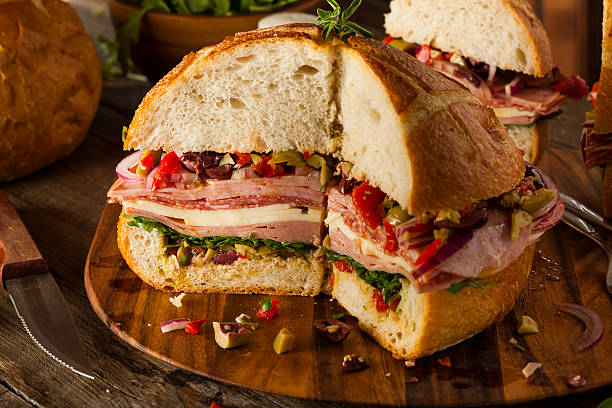 Another great New Orleans location offering up traditional muffaletta sandwiches to diners is Alberto’s Cheese & Wine Bistro. In addition to muffalettas, Alberto’s also offers it’s namesake cheese and wine, as well as plenty of other staples that fit right in within New Orleans’ French Quarter.

The Creole House is an eatery that offers authentic Cajun cuisine, and it sells a take on the muffaletta that’s exceptionally tasty! The restaurant also offers up a whole host of other creole offerings, so there are numerous reasons to visit this beloved New Orleans eatery.

DiMartino’s has been a New Orleans staple since the mid-1970s. The restaurant opened up it’s doors in 1975, and it’s become one of the most popular locations in the city for muffalettas in the decades since. One of the great things about DiMartino’s is that it has several locations throughout the state of Louisiana, so those outside the city proper can get an authentic muffaletta without venturing into it!

Cafe Amelie first opened up to the public back in 2005, and it has garnered a reputation over the ensuing years for being a favorite muffaletta stop amongst French Quarter locals. One of the things that makes this eatery stand out amongst the competition, outside of it’s incredible muffalettas, is the atmosphere. Cafe Amelie has a quaint little courtyard that will make your muffaletta-eating experience all the more enjoyable. In the relatively short time that the eatery has been around, it’s become a beloved staple of the region.

As it’s name may imply, Cochon Butcher is a restaurant that knows it’s meats! The eatery is styled after an old-timey meat market, and you’ll find some exceptional varieties of flesh being offered, with all of them being in-house cuts and creations. Cochon Butcher also knows what it’s doing when it comes to muffalettas, as their muffalettas are some of the best that you’ll find being offered anywhere in New Orleans.

Besides meat and New Orleans-style sandwiches, Cochon Butcher also offers it’s diners an impressive array of wines and sides. It’s prices are relatively reasonable, and it’s one of the preeminent places to visit in the area if you’re into fancy meats! The fact that it offers up one of the finest takes on the traditional muffaletta sandwich is simply a bonus.

Last but not least, let’s take a look at the New Orleans staple by the name of Welty’s Deli. Like Central Grocery, Welty’s Deli is an eatery that looks like just another deli from the outside, but you’ll know the true power of this awesome restaurant once you taste their muffalettas! The meats that comprise the muffalettas at Welty’s Deli are salami, ham, and motadella. These meats are then topped with provolone cheese, as well as the deli’s house-made olive salad.

The nine restaurants that we’ve taken a look at in this article are unquestionably some of the best places in New Orleans to try out muffaletta sandwiches! Whether you’re looking for a fancy dining experience with a pairing of wine or would prefer to grab a mouth-watering muffaletta from an unassuming deli, we hope that you’ll find the perfect dining experience for you based upon the recommendations above. The muffaletta sandwich is a New Orleans staple that all visitors need to experience for themselves!