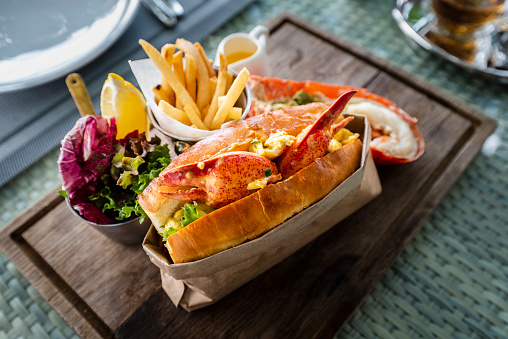 Located at Two Lights, the Lobster Shack is the epitome of what one might picture in their mind when they think of a seafood restaurant in Maine. The restaurant stays true to it’s name, serving up some of the finest lobster you’ll find in Maine out of an assuming little shack. Another little touch that adds to the unassuming nature of the Lobster Shack is the plastic trays that it’s food is served on. Rest assured, though, that they’ll be carrying some of the best lobster rolls in the state.

A limiting factor of the Lobster Shack is that it’s only open from March through October. Still, those that are visiting the state of Maine during this time period and wish to experience a New England delicacy in one of the most authentic ways possible should seek this place out.

Quoddy Bay Lobster is a family-owned restaurant that’s located in Eastport. The location offers a quaint dining experience with traditional Maine lobster rolls, and sits right along the Bay of Fundy. Diners can experience a nice view of the bay while they chow down on some great lobster rolls!

The Barnacle is a bar that’s located in the downtown area of Bar Harbor. Though it’s easy to overlook the Barnacle if you don’t know any better, the bar actually serves up some exceptional lobster rolls! Though the Barnacle’s emphasis is on the alcohol, it’s lobster rolls can compete with those offered up at any other location in the area. If you’re into New England microbrews, that’ll just be an added bonus!

Those looking for a fleshed-out dining experience should note that lobster rolls are some of the only things that are served at the Barnacle food-wise, meaning that diners might not have much to do if they aren’t interested in sticking around for a drink or two. Still, if you know what you’re getting into, the lobster rolls are definitely worth a try.

The fact that the Landing Store isn’t as flashy as some other locations may make it stand out less to tourists, but it’s still managed to become a favorite amongst locals by word of mouth alone. The Landing Store is located in the town of Kennebunk.

Located in Rockport, Graffam Bros. Seafood Market has been in operation for over 70 years! Located in a shack not all that different from the one that houses the Lobster Shack, Graffam Bros. Seafood Market first came into being in 1946. The restaurant has managed to thrive in the many decades since it’s first introduction to the public thanks to the unmatched quality of it’s tried-and-true New England lobster rolls, which are some of the finest in all of Maine!

Bagaduce Lunch is named as such for its location along the mouth of the Bagaduce River, in Penobscot. This is another eatery where the views are as great as the food. If you like lobster rolls and stunning riverside scenery, then stopping in at Bagaduce Lunch should be seen as a must!

The other styles include Connecticut style and Picnic style, with the latter being a traditional lobster role that’s served with coleslaw. Bite Into Maine’s more unique offerings include it’s Chipotle, Wasabi, and Yellow Curry lobster rolls. These lobster rolls are all a bit spicier than the norm.

Another food truck in the state of Maine serving up some excellent lobster rolls is Greet’s Eats. The food truck has been in operation for over a decade, and it has become known for the exact opposite of what Bite Into Maine has become known for. Greet’s Eats operates with an emphasis on the traditional Maine lobster roll. In fact, the woman that operates the food truck utilizes an authentic Maine recipe that has been passed down in her New England family for seven generations! Those looking for some of the most authentic lobster rolls in Maine need look no further.

There are tons of different places to find lobster rolls in Maine, and all of the places that we’ve explored offer slightly different experiences to tourists. Whether you’re new to the game and want to get a New England experience that’s as authentic as possible or have already tried lobster rolls and are looking to experience something a bit more unique, we hope that this article has given you some good ideas about where to go searching for the delicious Maine staple!