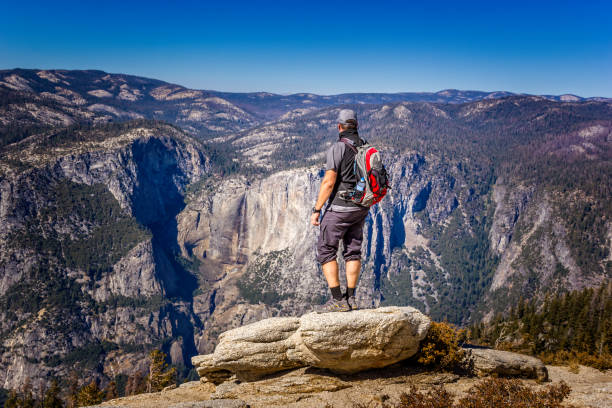 Located in the Sierra Nevada mountain range of California, Yosemite National Park is one of the preeminent outdoors destinations on the West Coast. The national park is particularly popular amongst hikers, as it features hiking trails that will give tourists an up-close-and-personal view of some of the most stunning natural landmarks in the region. If you’re interested in learning what the best hikes in the area are, join us as we find the best hikes in Yosemite.

We’ll start this article off by looking at Four Mile Trail. Despite the name of this hiking trail, the journey that it offers is actually closer to ten miles when all is said and done. The trail itself is closer to five miles long than four, and hikers will have to hike the trail back and forth in order to make the full journey. Besides the length, Four Mile Trail is also moderately difficult for a few other reasons. For one thing, there’s a significant elevation as you make your way up the trail. Though this means that the way back can be a breeze, inexperienced hikers may give up before they get to the end.

The Cathedral Lakes Trail is a hike that gets its name from the fact that the naturally occurring rock formations found at its end have a slight resemblance to a Gothic cathedral. The trail is located within the Tuolumne Meadows area of Yosemite National Park, and it’s widely considered the preeminent hike in the area thanks to its exquisite and unique scenery. The hike will take you through various locations, including Cathedral Peak and the namesake Cathedral Lakes. Both of these locations offer great alpine scenery, making the hike as a whole a beautiful journey.

The Cathedral Lakes Trail is located at an elevation of around 10,000 feet, which means that the scenery that you’ll find along the hiking trail is something truly special. You’ll find glistening meadows brimming with wildflowers when you take this hike during the summer months, with the scenery being at it’s peak during the month of July. Cathedral Peak is where you’ll find the rock formations that resemble a Gothic cathedral, and other locations that you’ll find along this incredible hike include the glacier-carved Cathedral Basin.

The Mist Trail is named for the fact that it’s hikers will be covered in a dense screen of fog along the entire journey. This makes hiking the Mist Trail quite the experience, and there are also numerous other things that make the hike worth experiencing. For one thing, there are the sights of the two beautiful waterfalls that cause the trail’s signature mist! The mist that you’ll find all along the Mist Trail comes from the raging waterfalls that you’ll witness as you take the hike. These waterfalls are named Vernal Fall and Nevada Fall, respectively. Another thing that makes the Mist Trail an awesome hike is the landmark by the name of Half Dome, which is a big granite dome with a distinct shape.

Though these are technically two different trails, tourists typically take both hikes together so we’ll consider this just one hike for the purposes of this article. If the two waterfalls that could be found along the journey offered by the Mist Trail impressed tourists, then tourists are liable to be doubly impressed by the sight of the tallest waterfall in North America! That’s the reputation that Yosemite Falls rightfully retains with its staggering height of nearly 2,500 feet. Taking this journey will start you towards the base of Yosemite Falls and you’ll have to work your way up. When you get to the top, you’ll be treated with views that exceed the beauty of Yosemite Falls itself. You can see incredible views of the surrounding valley, as well as the aforementioned Half Dome. Visitors to Yosemite Falls National Park won’t want to miss out on experiencing the waterfall that gives the park its name, and this hike is the best way to go about doing it!

The Grizzly Giant Loop Trail is an awesome hiking trail that can be found in an area of Yosemite National Park by the name of the Mariposa Grove of Giant Sequoias. As one might infer from this area’s name, Mariposa Grove of Giant Sequoias is a grove that’s renowned for it’s giant sequoia trees. Besides the previously mentioned Yosemite Falls, these giant sequoias are one of the biggest draws bringing tourists from all around the world to Yosemite National Park. The Grizzly Giant Loop Trail is one of many hiking trails that can be found within the immediate area, though it’s generally considered the most popular. Hikers will find numerous giant sequoias along the hiking trail. One of the things that make the hike so popular is that it’s incredibly easy. There’s even a portion of the trail that’s wheelchair-accessible!

Heading back to the area of Yosemite Park that goes by the name of Tuolumne Meadows, there’s another great hiking trail by the name of Sunrise High Sierra Camp. Sunrise High Sierra Camp is an exclusive trail, as visitors need to attain a permit in order to hike it. These permits aren’t all that easy to get, as they are attained via a lottery system and there are often numerous people vying for permits at popular times. The exclusive trail takes hikers past numerous beautiful landmarks, including Tenaya Lake and Tenaya Creek.

If you’re interested in taking an awesome hike through Yosemite National Park, all of the above trails offer great opportunities! These trails feature varying difficulty levels, but they all showcase the national park’s beautiful scenery.