Best Things To Do in Bend, Oregon 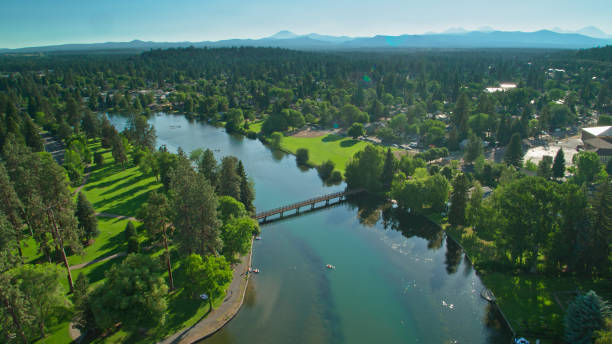 If you’ve found yourself in the city of Bend, Oregon, you may be wondering what there is to do. Thankfully, there are a plethora of awesome things to do in and around the city, and we’ll be exploring the best of them in this article! Located along the Deschutes River, Bend is a wilderness destination that draws in crowds from all over thanks to its beautiful natural sights. However, there’s more to Bend than just its beautiful riverside scenery! Join us as we take a look at the best things to do in Bend, Oregon.

10 Best Things To Do in Bend, Oregon

Seeing the beautiful sights that can be found along the Deschutes River is one thing, but tourists won’t know the true depth of the area’s beauty until they take a trip to the Deschutes Historical Museum. The museum aims to offer an immersive experience that teaches visitors everything they need to know about the area’s local history.

The history of the region surrounding Oregon is about as impressive as the Deschutes River itself, and dates back to the time when Native Americans ruled the land. The various exhibits making up the Deschutes Historical Museum will show guests what it was like for the various Native Americans living off the land, with plenty of artifacts to help illustrate what it was truly like. Then, visitors will be taken on a journey all the way up to the present, with exhibits showing how early settlers of the region lived, as well as how the area came to be known as Bend, Oregon.

Learn about the Land at the High Desert Museum

The museum occupies well over 100 acres, and features both indoor and outdoors exhibits. Some of the notable exhibits include one that will teach you about how poachers illegally hunt for animals, such as bobcats. The museum also functions as an animal sanctuary, and you will get the chance to see the animals that are in their care!

Other fun things to see at the High Desert Museum include its area that’s dedicated specifically to lizards, which is referred to as the “Desertarium”. The Desertarium will give you the chance to see creatures such as turtles and snakes, as well as various other lizards. There are even some frogs! If you’d like to be educated on the importance of preserving Bend’s wilderness, then this is the museum for you. The museum also features a few exhibits unrelated to wildlife.

It’s always fun to learn about the area that you’re staying in from a third party, but nothing beats getting up close and personal with the wilderness surrounding Bend, Oregon. One of the best places to start is the Newberry National Volcanic Monument, which is an area designated to protect it’s namesake Newberry Volcano. The volcano is gigantic and active, but it hasn’t erupted in well over 1,000 years.

In addition to simply standing in awe of the Newberry Volcano itself, visitors to the Newberry National Volcanic Monument will get the chance to experience the many strange geographical features that have been formed over innumerous millennia by the volcano’s eruption.

Outside of the 500-foot cone comprising the volcano, the most amazing sight within the Newberry National Volcanic Monument is arguably the Lava River Cave. As it’s name should suggest, the Lava River Cave is an underground cave that was formed by a river of lava. The cave spans over 5,000 feet.

Besides the unique buildings that its shops reside in, another thing that sets the Old Mill District apart from other shopping malls is the fact that it features outdoor trails and a dog park. Numerous events are held at the shopping mall and its surrounding location throughout the year, and the mall is also home to the Hayden Homes Amphitheater.

Gaze Upon the Wonder of Tumalo Falls

Tumalo Falls drops nearly 100 feet, and seeing it is well worth the small hike it takes to get there. The walk to the waterfall from the nearby visitors’ parking lot is only about a quarter of a mile, but there’s a slightly longer and more scenic trail to the location that tourists can take if they’re feeling up to it. Rest assured, there are plenty of natural sights to enjoy in the area besides the waterfall itself.

If you want to truly get to know Bend, Oregon, you’ll have to take a journey through the city’s downtown area. Strolling through the downtown area of bend is a fun and enlightening experience, with new things to see around every corner. The atmosphere is quaint, with bookstores, coffee shops, breweries, and plenty of boutique shops and eateries. The downtown area of Bend, Oregon, is also home to Drake Park, where the locals love to take strolls in the afternoon. The whole place is situated just along the Deschutes River.

See the Rough Rapids of the Benham Falls

Readers might think it’s cheating to put another waterfall on this list, but the Benham Falls are technically multiple waterfalls! Not only that, but these are waterfalls that you can actually go down in a kayak if you’re brave enough. The Benham Falls comprise a very intense section of the Deschutes River, and kayakers are liable to end up on them accidentally if they’re not careful.

If you’re not looking to venture into the dangerous waters of the Benham Falls themselves, then you may find yourself more at home on the Benham Falls Trailhead. Hiking around the area is an incredibly pleasant experience, as there is a great deal of natural scenery to take in while you do it.

While Bend, Oregon, can be a fun city for tourists to visit year-round, the fact of the matter stands that a vast number of people come to the area specifically during the winter. This is because there are great skiing opportunities to be had in the area surrounding Bend, and Mount Bachelor is the city’s preeminent ski resort! The ski resort gets it’s name from the volcano that it’s located upon, and this volcano has created some awesome slopes. There are over 4,000 acres of skiable terrain at the ski resort. There are trails of varying difficulty, and they all offer awesome sights and tons of fun!

Those that haven’t had any experience skiing will be able to take advantage of the world-class resorts personalized lessons, and those that aren’t interested in putting on skis can try their hand at the numerous other winter sports that the resort offers visitors the chance to partake in. Some of the other winter activities that you can try out at the Mount Bachelor Village Resort include more traditional fare such as snowshoeing and tubing, as well as dog sledding!

There are plenty of awesome natural sights that can be found in the city of Bend, Oregon, as well as it’s surrounding area. In certain areas, the amazing sights are so plentiful that you don’t even need to get out of the car to enjoy them! If you’re looking for a relaxing drive that will allow you see some of the beautiful natural scenery around Bend, then look no further than the Cascade Lakes National Scenic Byway!

The Cascade Lakes National Scenic Byway spans nearly 70-miles, and the drive is filled with incredible views of the Cascade Mountains. The drive can take up to five hours for tourists that want to soak in the scenery, and there are even some nice hikes and rest areas that can be found along the way. One such hike that can be found along the Cascade Lakes National Scenic Byway is the Todd Lake Loop Trail. This trail is relatively easy and should only take about a half of an hour to complete, making it perfectly feasible to fit in alongside your drive.

There are numerous ways to experience the beauty surrounding Bend, and this one’s great for those that have had enough hiking. The only thing that tourists will have to keep in mind before taking this drive is that the Cascade Lakes National Scenic Byway is only open from June to October, and the road conditions can still get a little rough during those months if the weather’s bad.

If you like awesome geographic features and are looking to experience the natural wonders of Bend, Oregon, then you’ll definitely want to put a visit to Smith Rock State Park high on your itinerary. You’ll find rock formations galore while visiting this awesome state park, and rock climbers are liable to feel as if they’ve died and gone to heaven. Smith Rock State Park occupies around 700 acres of expansive wilderness, and there are plenty of hiking trails that will allow you to take in the full beauty of the surrounding formations.

Finally, there are also some camping opportunities to be had while visiting Smith Rock State Park, but spots are handed out on a first-come-first-served basis. Those that are looking to get one of the tent-camping spots that can be found within the park need to make sure to get up bright and early!

If you’re in Bend, Oregon, there are plenty of awesome things to do. Whether you’re interested in the surrounding area’s natural beauty or are more interested in its modern culture, you’ll find plenty of stuff to keep you busy while visiting. With its location along the Deschutes River and its proximity to an active volcano, the city of Bend truly offers a surprising amount of things for its guests to experience.