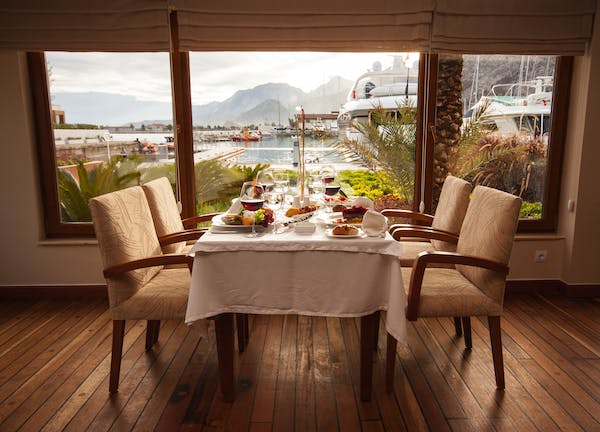 Tucson, Arizona, is a Southwestern city with tons of great restaurants! Whether you’re looking to see how Tucson tackles world cuisine or would prefer a taste of something more unique to the region, join us as we take a look at the best restaurants in Tucson, Arizona!

This is a restaurant with a tricky name for those that don’t have a tongue for Mexican dialect. However, the eatery is certainly worth a visit regardless of if you can pronounce the name or not! Cocteleria La Palma Mariscos y Mas offers Mexican seafood, with the majority of the food being sourced locally from the nearby Sea of Cortez. If you’re looking for seafood dishes with a Mexican twang, you’ll find them here!

The Parish is a restaurant that’s less Southwestern and more Southern. In particular, stepping into the parish and sampling the incredible cuisine is liable to make one feel as if they’ve ventured into New Orleans. If you like hush puppies and gumbo, you’ll find plenty to love on the menu at the Parish. While much of the menu is made up of New Orleans essentials, there are some more experimental offerings that can be had on a week-to-week basis. The weekly specials always offer up unique treats, though you can choose to rely on the Southern staples if you’re not feeling adventurous.

If you’re looking for a place to grab a pleasant brunch in Tucson, Arizona, you can do no better than 5 Points Market & Restaurant. The quaint little brunch spot serves up light fare that’s made using locally sourced ingredients. True to the joint’s name, 5 Points Market & Restaurant is a market in addition to being an eatery, meaning that it’s also a great place to shop for local produce and baked goods.

El Taco Rustico is a local Tucson favorite that recently made a big leap. The eatery started out as a food stand operating out of a local flea market. Eventually, word of mouth spread so much that people were coming to the flea market just to try out the tacos! When the lines started getting too long, El Taco Rustico knew that it had to expand. Today, the restaurant has it’s own location, and it’s always bustling.

Tito & Pep is a charming little eatery that uses a host of locally sourced ingredients in it’s world-inspired dishes. Everything at the eatery has a uniquely Arizonian charm, despite the fact that many of the dishes take liberal inspiration from other parts of the world. In addition to the locally sourced ingredients, another thing that makes Tito & Pep feel especially Arizonian is the mesquite seasoning.

Tumerico is one of the preeminent eateries to dine at in Tucson, Arizona, if you happen to be vegan. However, the cuisine is so good that even omnivores seek out the experience. Tumerico serves up Latin food with a vegan twist, and the dishes are tasty enough that even the most vegetable-averse eaters likely won’t miss the meat.

The jackfruit tacos are particularly popular, and you could probably bring them home and fool your family into thinking that they’re made from traditional carnitas. The menu is always changing, so there’s also something new to try.

If you’re looking to try out some Ethiopian food in the city of Tucson, then Zemam’s Ethiopian Cuisine is going to be the place for you. The eatery has been in business for decades, and has expanded since it’s start with another location within the city. The second location goes by the name of Zemam’s Too, and both of the eateries are just as good. If you like Ethiopian food, you’ll find that Zemam’s Ethiopian Cuisine gives anything you’ve tried before a run for it’s money. If you’re new to Ethiopian cuisine, then you’re in for a treat!

Anita Street Market is a little hard to find, and it’s actually in the middle of a residential neighborhood. Anita Street Market gives a new meaning to the term “home cooking”, and you’ll fall in love with the Mexican cuisine that the eatery offers. The tortillas are soft and homemade, and you can even buy a pack to take home once you’re done with your meal!

La Indita is a restaurant that has made a name for itself as the best place to eat in Tucson, Arizona, if you want to try out some Native American food. There aren’t a whole lot of places in the Southwestern city serving up Native American cuisine, which makes a visit to La Indita an especially unique treat. The flavors will be unlike anything that most diners have ever experienced, utilizing such ingredients as cacao.

One of the most popular sushi places in Tucson, Arizona, is Sushi on Oracle. From the outside looking in, Sushi on Oracle may look like a hipster joint. However, the food offered up at the eatery is as traditional as can be, and we mean that in a good way! If you’re looking for classic sushi done right, then Sushi on Oracle is the place to go.

Like a few of the other eateries that we’ve mentioned so far in this article, Barrio Charro is a restaurant that offers up a culinary experience that’s uniquely Southwestern. The thing that makes Barrio Charro stand out is it’s famous baked bread, which is made using heirloom White Sonora wheat. Like Sonoran hot dogs, White Sonora wheat is something that came from the Mexican state of Sonora and then bled up through the Southwest over time, becoming a staple. You can either by a loaf of bread and take it home with you, or you can try out one of Barrio Charro’s awesome sandwiches.

If you’re looking for some great pizza in the Tucson area, then try Anello! Anello serves up wood-fired Neapolitan pizzas, and there’s always something new and unique on the menus thanks to the locally sourced ingredients. The eatery has a modern and minimalist feel, with lots of atmosphere.

There are times when nothing beats a tried-and-true steakhouse, and Tucson has you covered in these situations. PY Steakhouse is something of a hidden gem in the city, with the eatery mainly being a favorite amongst locals. This is another restaurant that utilizes locally sourced ingredients in it’s cuisine. The menu is full of steakhouse favorites, and the atmosphere is appropriately sophisticated.

We’ve already taken a look at a handful of eateries that take inspiration from Mexico, but Mercado San Agustin goes overboard with it’s reverence for the country. Mercado San Agustin offers up dishes from all over the country of Mexico, whereas other eateries tend to focus on one specific region. Everything is made from scratch, and the building that houses the restaurant has a nice Spanish colonial feel.

Finally, let’s finish this article off by taking a look at a Chinese restaurant with a decidedly silly name. Some may balk at Noodleholics based on the name alone, but they’re liable to become literal noodleholics themselves once they try out the restaurant’s excellent noodle bowls. There’s an insane variety on the menu at Noodleholics, meaning you could eat here repeatedly and never get bored. The atmosphere is unassuming, making this a perfect place for those who want to keep things casual on their night out.

All of these Tucson eateries offer great culinary experiences, and it’s up to you to pick the one you want to try out first! Whether you’re interested in flavors that are uniquely Southwestern or flavors from other parts of the world, there’s a restaurant in Tucson that’s guaranteed to fit the bill.