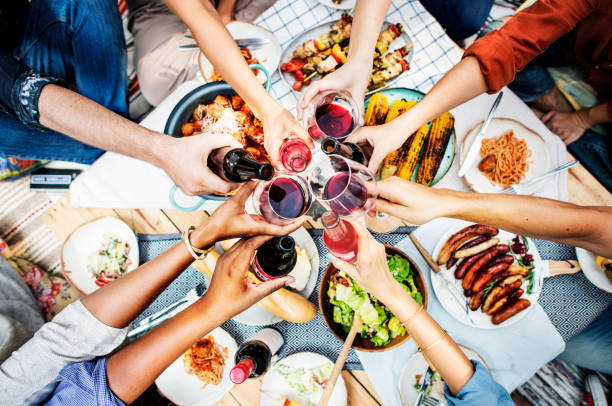 Located in Sparta, Andre’s Lakeside Dining is an eatery that stands out amongst the New Jersey competition for several reasons. One of these reasons is in the name! Andre’s Lakeside Dining allows you to eat out in the open right next to the beautiful Seneca Lake. The eatery’s dining area consists of a finely kept green yard, with crystal chandeliers hanging from the trees. As far as the food goes, Andre’s Lakeside Dining offers cuisine that lives up to the magic of the setting. The eatery likes to mix it up a bit, offering French cooking with a bit of an oriental slant.

The most popular option for diners is to order the six-course meal, which will run you around $100 bucks a person. For both the atmosphere and the food itself, the price is worth it! If you’re looking for something lighter, there are also other options that can be ordered from the menu. Just keep in mind that you’ll have to bring your own wine! Andre’s Lakeside Dining doesn’t serve alcohol, but it allows you to bring it in.

Anthony David’s is an Italian restaurant that’s located in Hoboken, on Bloomfield Street. Its uptown location is just off of the area’s main strip. The restaurant boasts an impressive dining area, as well as a fairly large patio. The nice atmosphere is matched by the classy Italian cuisine. Like Andre’s Lake Side Dining, Anthony David’s doesn’t serve alcohol but allows guests to bring their own. Diners should also keep in mind that the restaurant doesn’t accept cash payments, so they’ll need to bring other means.

We’ve already taken a look at Italian cuisine, as well as French cuisine that takes some oriental inspiration. Now, let’s expand our world palates further by taking a look at one of the best locations in New Jersey to get a taste of Indian food! Benares is located in Wyckoff, and it offers modern Indian cuisine to its plethora of New Jersey diners. The restaurant hails from Manhattan, where it found immense success before deciding to expand outwards to New Jersey. The restaurant has found equal success in the Garden State, with New Jersey residents and tourists alike falling in love with the flavorful and diverse offerings.

Benares is a particularly great place to go if you’re a vegetarian, as vegetarian options make up a significant portion of the menu. Benares keeps things modern, and you won’t be able to tell just by looking at the unassuming eatery that it offers some of the best and most authentic Indian food in the area.

Restaurant Lorena’s is another great French restaurant located within the state of New Jersey, with this one finding its home in the area of Maplewood. Restaurant Lorena’s stands apart from Andre’s Lakeside Dining in that it has a liquor license. In addition, the French cuisine being offered is a bit more authentic and doesn’t take inspiration from any other parts of the world. If you’re looking for authentic French cuisine paired with a great bottle of wine, this is certainly the place! However, there will always be room for the unique fusion and serene atmosphere of Andre’s Lakeside Dining.

Ehren Ryan is the owner and head chef of Common Lot, and his restaurant is another eatery that takes inspiration from varied locations across the globe. However, Common Lot’s varied inspiration doesn’t result in a consistent offering of fusion dishes. Instead, chef Ehren’s varied inspiration has resulted in Common Lot offering authentic takes on all sorts of varied world dishes from differing locations under the same roof. You’ll never know what you’re going to get when you go to Common Lot, which is located in Millburn. However, you will always know that it’s going to offer you an authentic taste of a far away place.

Located in Chatham, Restaurant Serenade is a restaurant that is known for it’s cream-free soups. This might sound odd, but head chef James Laird has become known the world over for his ability to craft incredibly creamy soups without the use of such obvious aids as butter and cream. If you’re averse to cream and you love creamy soup, head over to Restaurant Serenade.

White Birch is another New Jersey eatery with something unique of it’s own that helps it stand out from the competition. White Birch’s special attribute would be the gigantic garden that is kept by owner and head chef Sam Freund. This garden provides the majority of the restaurant’s produce, and the menu changes depending upon what kind of vegetables are in season. Despite the fact that the menu is always changing depending on the season, there is one item on White Birch’s menu that diners have come to count on. That would be White Birch’s signature onion tart.

LT Bar & Grill is located in Hackensack, and it’s aim is to offer tried-and-true American fare with a fancy twist. A French chef owns the eatery, and his obsession with American fare has led him to try and perfect the art of American cuisine. His take on the hamburger is one of the most savory that diners are liable to find anywhere in the country. In order to craft his perfect hamburger, chef Laurent Tourondel grinds and combines four separate cuts of meat.

He then tops the gourmet patty with a uniquely heart cheddar cheese, as well as mushrooms, onions, and the kind of pickles that seem like you made them yourself. Finally, there’s the restaurant’s homemade peppercorn sauce, which ties the whole hamburger together.

You see, the majority of dishes that Americans have come to associate with Italian food are actually Americanized dishes that you won’t find being served back in Italy. Inexperienced diners may not immediately recognize some of the fare offered on Osteria Crescendo’s menu, but they can rest assured that they’ll be in for a treat! Meanwhile, those from Italy will appreciate the restaurant’s authentic offerings.

Bodegon is a restaurant located in Cliffside Park, and it’s cuisine hails from Spain! If you’re looking for authentic Spanish cuisine in the state of New Jersey, this is the place to find it! In particular, Bodegon’s dishes hail from the community of Galicia. Some of the most notable dishes being offered include the Galician octopus, which is peached. Besides it’s authentic Galician cuisine, another thing that makes Bodegon stand out is it’s bustling atmosphere. The eatery is generally lively, and it gets particularly lively towards the evenings.

Lastly, let’s take a look at the imminently fancy Blue Morel Restaurant and Wine Bar. This is an eatery for the upscale crowd, and it offers a high-end dining experience with food made using local ingredients. The highlight of the restaurant may be it’s raw bar and sushi offerings.

Regardless of what you’re hungry for, there’s a great restaurant in New Jersey serving just what you need! Hopefully, this article helped you find it. From the French fusion offerings of Andre’s Lakeside Dining to the upscale Blue Morel Restaurant and Wine Bar, there are plenty of great culinary experiences to be had in the Garden State.